Although I don’t take up content spinning assignments, now and then I get requests from clients to spin an existing article or blog post. On Quora I found that some people are confused about the difference between content repurposing and content spinning. I’m quickly explaining in this short blog post.

I will give you a recent example of repurposing my blog post.

Today I published a blog post in the morning titled 6 ways to make money with blogging.

Within this blog post there a subsection titled “10 benefits of publishing a business blog”. I created a YouTube video out of this subsection:

These days I often pick up small portions from my existing blog posts and web pages and then turn them into social media posts and even carousal posts. Sometimes I pick up a subsection, and create a complete blog post on it.

Content spinning means rewriting the same piece a blog post or article but using different words. Nothing is original in the spinned article. Just so that Google doesn’t take it as duplicate content, you use different words and different phases.

People pick up a blog post that is doing quite well. Rephrase the title. Then rewrite the whole thing using synonyms and alternative words.

Is article spinning bad? Is it plagiarism?

It is certainly plagiarism in the sense that if you do the same thing as a journalist, as an author, or even as someone who is writing a research paper, you’re simply picking information from someone else and using it as it is, and you can be sued for that. Just because you’re using different words it doesn’t mean it is original or it belongs to you.

I don’t like such work. As a writer I find it offensive if a client expects me to spin an existing article.

There is no dearth of content publishing ideas once you decide to use content marketing to promote your business, whether you want to publish content on your own website/blog or on third-party websites to gain more exposure (and high-quality incoming links).

As I have repeatedly mentioned on this blog, anything that manifests on the Internet can be termed as content. It’s another issue whether it is solving some purpose or not. An image, a link, a blog post, an articles, a social media update, a mindmap representation, your menubar, a video, a screen cast, a product description page, an FAQs page, everything that comes in front of you is content. So whenever you’re publishing something, you’re publishing content.

The latest iOS9 update comes with apps that can block not just advertisements but also analytics tools from accessing lots of user behavioural data when using the Safari browser. Content marketing these days depends a lot on analytics like the number of page loads or the pixels where most of the activities take place and the number of clicks coming from different users. Content marketers and business owners use these tools to gauge the efficacy of their content and then make changes accordingly. As content marketing evolves, more and more of it depends on analytics data churned out by tools like Google Analytics, Chartbeat, Inbounce, Optimizely and ClickTale.

All these tools can be blocked with the iOS9 ad blocker apps such as Crystal and Purify. How does this matter?

Although globally, according to this link, the usage of the Safari browser is 12.37%, in the US, it’s share is well over 48.8%. It’s not that everyone who uses Safari is going to block ads and analytics tools, but even if a major chunk does, it can change the way you analyse your content marketing data. This Marketing Land report on the topic explains exactly how it is going to affect the various ad serving and web analytics tools. According to this The Next Web blog post:

These new applications, which are mostly used to block ads, block JavaScript code from loading on websites based on a list that specifies which sources are disallowed.

That means there could be a crisis for marketing tools on the horizon if content blockers gain any sort of traction on iOS. There are hundreds of popular tools that marketing professionals use that could simply cease to be useful if mobile users disappear from their grasp altogether.

Google Analytics is widely used by both large and small companies to measure site traffic and learn more about the type of people visiting — with iOS 9 content blockers, it may become a lot harder to get a real picture of how many visitors are truly browsing a website or learn where they came from.

Optimizely, a tool used by companies to perform so-called ‘A/B testing,’ a method where a percentage of users are selected to see a tweaked version of a site to see if proposed changes perform better, also no longer works when a content blocker is installed.

Without A/B testing tools, companies that leverage such methods to learn about their visitors’ habits will be forced to guess whether a change is working well or not without the hard data that is normally collected before making a tweak.

Publishers like the New York Times, which rely on accurate traffic data to sell advertising may be acutely affected as visitor numbers appear to drop in number, when in reality they’re largely remaining the same.

Is it all doom for content marketing analytics? Not necessarily, according to this Adobe Digital Marketing blog post:

Although this new functionality is making headlines, it is not going to change things overnight. The most important thing to know is that content blockers are off by default. A set of APIs was released with iOS 9 to allow developers to create an ad blocking add-in — there is nothing enabled by default. In this regard, they are actually catching up with other browsers (Chrome, Firefox, Internet Explorer), so the effect should be nominal.

Data crunching can help you only up till a particular level and after that you have to use your own logic and this is where, it might be actually a good news for experienced content marketing experts who use their own intelligence rather than depending on data analytics tools.

An optimized web page is a lot more than what it looks to you when you load it into your browser. The web crawlers and search engine ranking algorithms see your web page in a totally different manner than how you and your prospective customers and clients see. Similarly, people on social networking websites view your web page differently than those who view your link on a search engine result page.

What is an optimized web page?

An optimized web page looks good to your human visitors as well as search engine crawlers. “Optimized” means it achieves its purpose both in terms of converting maximum number of visitors into paying customers and clients and getting higher search engine rankings on major search engines.

Have a look at this highly appealing and informative infographic sent to me by Kelsey Phillips of Surepayroll. This is where the infographic “The Anatomy of an Optimized Web Page” has been originally published.

The main ingredients of an optimized web page are:

These are the basic ingredients that can help you create an optimized web page. The rest of the information you can view in the infographic above. 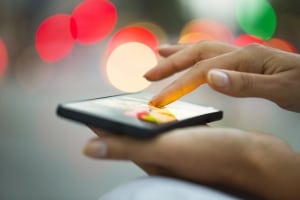 The writer of this LinkedIn post says that (probably he owns or works in an SEO company) 50% of their clients are receiving more than 45% non-PC organic searches. He also makes a rough prediction that over 65% of their clients may receive more than 50% of their traffic from mobile phones and tablets rather than conventional computers and laptops.

This is not one single isolated incident of an online marketer showing data indicating that more people are using mobile phones to carry out searches and use the Internet in general. If I’m not mistaken, around 60% Internet users in India have never used a computer or a laptop – they are using their mobile phones to access the web. In small towns and even in villages, there are some shops that charge Rs. 10 to set up a Facebook account on a mobile phone.

So as a content writer, should writing for mobile devices be your 1st priority while writing and formatting your content? Undoubtedly your content must be scalable. It must be easily accessible on devices of different screen sizes. But it has got more to do with the layout of your webpages.

Personally I believe every sort of content that is reader-friendly is also mobile-friendly. If possible, create shorter sentences and shorter paragraphs. Confine one paragraph to one idea – a couple of sentences. Keep your images easily scalable so they can contract and expand according to the screen size. Use a font type that adjusts itself according to the screen resolution. But again, these are technical aspects.

As a content writer you should know that an average mobile user is more distracted than an average PC or laptop user. You can carry your mobile phone anywhere. You might be travelling in a train. You might be having a chat with a colleague in your office. You might be rocking your kid. For all I know, you might be reading this blog post sitting in a restaurant buzzing with activity and noise while trying to make sure that your coffee doesn’t spill over your screen.

Unlike with a computer or a laptop, you rarely see people using a mobile phone as an exclusive exercise. It is always done while doing something else. So there are greater number of distractions. Your content needs to compete with these distractions in order to keep your readers hooked.

Drab, uninspiring content naturally goes out the window. Your writing needs to be crisp, interesting, compelling and highly useful. But how is it different from writing content for computers and laptops? Not much.

Anyway, if you want to create content specifically for mobile devices like smart phones and tablets, here are a few things you can keep in mind: