There was a time when digital marketing was avant-garde. People swore by PPC and retargeting. These advertising campaigns use software algorithms to decide, according to your net browsing habits, what sort of advertising you should be exposed to when you visit various websites, even social networking websites like Facebook and LinkedIn. Small bits of information like some ad that you recently clicked or some article that you recently read, or something that you purchased on an e-commerce website, are used to calculate and predict you’re buying pattern.

According to this Bloomberg Business article, such PPC and retargeting campaigns are nothing but click frauds. Below I’m publishing a small portion of the article, you can read the entire article in the original link above.

Increasingly, digital ad viewers aren’t human. A study done last year in conjunction with the Association of National Advertisers embedded billions of digital ads with code designed to determine who or what was seeing them. Eleven percent of display ads and almost a quarter of video ads were “viewed” by software, not people. According to the ANA study, which was conducted by the security firm White Ops and is titled The Bot Baseline: Fraud In Digital Advertising, fake traffic will cost advertisers $6.3 billion this year.

One ad tracked in the study was a video spot for Chrysler that ran last year on Saveur.tv, a site based on the food and travel lifestyle magazine. Only 2 percent of the ad views registered as human, according to a person who was briefed on data provided to the study’s participants. Chrysler, which doesn’t dispute the data, ceased buying ads on the site once it became aware of the “fraudulent activity,” says Eileen Wunderlich, the automaker’s spokeswoman. White Ops, which left out the names of the advertiser and website in its published study, declined to comment. Executives at Bonnier, the publishing company behind Saveur.tv, say they screen every impression and that the White Ops study looked at 5,700 ads, a very small number. They also say there are multiple methods for detecting nonhuman traffic, and that there’s no single standard used by the industry. “We weren’t aware of any problem or complaint. If it had been brought to our attention we would have fixed it,” says Perri Dorset, a Bonnier spokeswoman.

Fake traffic has become a commodity. There’s malware for generating it and brokers who sell it. Some companies pay for it intentionally, some accidentally, and some prefer not to ask where their traffic comes from. It’s given rise to an industry of countermeasures, which inspire counter-countermeasures. “It’s like a game of whack-a-mole,” says Fernando Arriola, vice president for media and integration at ConAgra Foods. Consumers, meanwhile, to the extent they pay attention to targeted ads at all, hate them: The top paid iPhone app on Apple’s App Store is an ad blocker.

The revelations are quite startling considering the fact that even big companies like Google depend on pay per click traffic.

So what do you do if you want to promote your business online? It may seem like blowing my own horn, but when it comes to promoting your business online, nothing can beat, at least for the time being, content marketing. You cannot fake high quality content and the response it generates. Of course there is spamming and there are automatic content aggregators but such spurious content generation tactics never work or rarely work. It’s the original, relevant and valuable content that always does the trick. 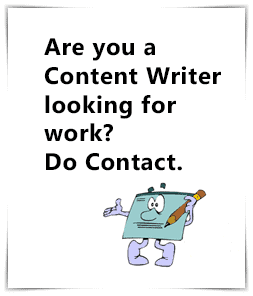